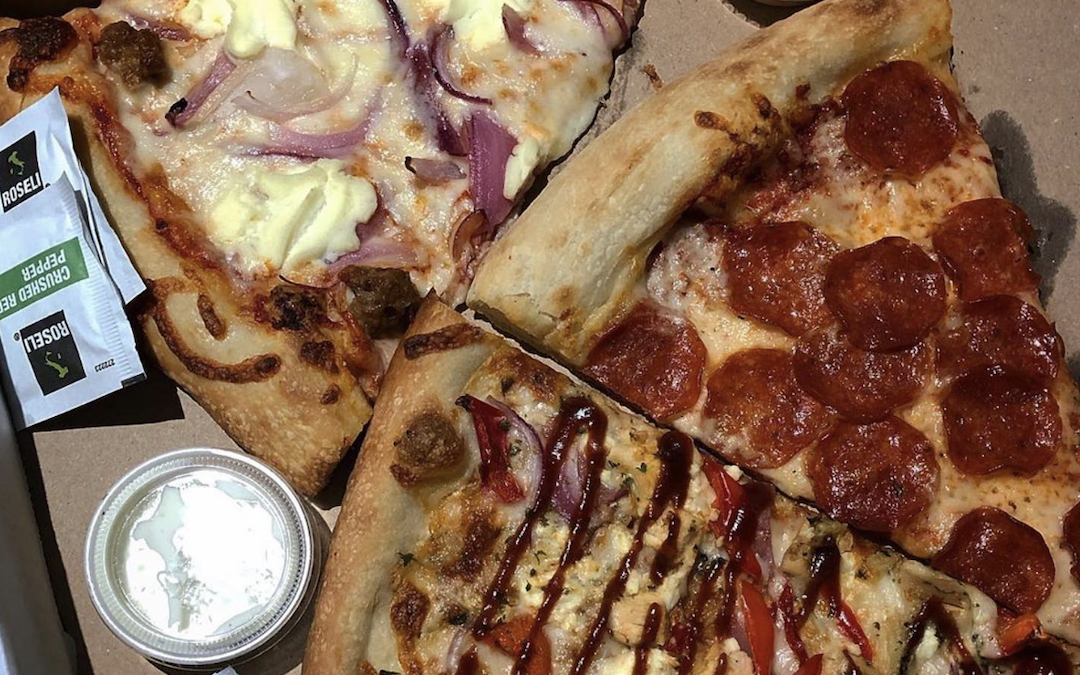 Let’s be real, everyone loves pizza. The real debate rests on what the best kind of pizza is–and we’re not talking toppings necessarily. We’re talking about whether New York or Chicago-style pizza takes the trophy. Obviously our favorite style of pizza is New York City, because…. We’re Empire Slice House, DUH! But hey, let’s take a look at the differences between these beloved pies and we’ll let you decide for yourself what style of pizza is the best.

Pizza has been there for us through thick and thin, but what do you prefer? If you lean more towards the thick side then Chicago-style pizza is undoubtedly the one for you. Chicago crusts form a bowl shape and reach all the way to the top of the pizza, leaving lots of extra space for your desired toppings. Chicago pizza crusts also don’t tend to reach over 12 inches in diameter because of how tall they are. Moreover, these deep-dish pizzas can sometimes have an additional layer of dough on the top, known as “stuffed pizzas.”

If you prefer thin crust, New York-style pizzas are the way to go. These pies typically have thin and crispy crusts that run the risk of being soaked up if there is too much sauce or too many toppings. The NY crusts can also reach up to a whopping 36 inches in diameter. So if you love big pizzas with the crunch of a crispy crust and minimal toppings, you’ll find that the NY-style pizza is to die for.

Although, you might wonder how the crusts on these pizzas are actually formed, and the answer is simple. When it comes to Chicago-style pizzas, they are baked in a pan. The dough for the crust is shaped inside of a cast-iron skillet or cake pan and the edges are stretched up the walls to give this pizza its height. On the other hand, New York-style pizzas are hand-tossed in order to give them their massive width. NY pizzas then bake on a pizza stone, rather than in a pan.

In a lot of ways, the sauce will either make it or break it for the pizza. Dare we say it’s the most important part?!

For those of you who find yourself asking for extra sauce on your pizzas then Chicago-style has you covered. The bowl shaped crust holds plenty of tomato sauce, without the crust ever becoming soggy. This sauce is also typically chunkier than the kind used on New York pizza. But perhaps one of the biggest distinctions of a Chicago style-pizza is the fact that the sauce is actually put on top of the toppings rather than underneath. The reason for this being the dough used for Chicago pizzas takes longer to cook than the dough used for NY pizzas. Consequently, the ingredients have to be layered in a very specific way so they don’t burn: with the sauce on top.

If having sauce on top of your toppings isn’t exactly your cup of tea, you’ll more likely want a slice of a New York-style pizza. NY pizzas generally have a thin layer of sauce that doesn’t quite hit the edge of the crust to avoid spilling over. The sauce used on New York-style pizzas is also more heavily seasoned so a little goes a long way to give the perfect crust to sauce ratio.

Ok, maybe the cheese and topping style is what makes or breaks a delicious pizza… It is the part that typically holds the most flavor.

The cheese preference for New York-style pizzas is largely just grated mozzarella which is spread across the pizza up to the crust edge. This cheese is then covered with just a single layer of each chosen topping, giving it the perfect balance to the thin crust and layer of sauce. The overall advantage of using less cheese and toppings is that you can enjoy more slices of New York-style pizza than you could with Chicago pizza.

Chicago style-pizzas take an entirely different approach when it comes to cheese and toppings. For starters, Chicago pizzas use cheese slices and multiple layers of different cheeses rather than just one type of grated cheese. These pizzas also have multiple layers of toppings that are stuffed into the pie. Chicago-style pizzas largely resemble casseroles in the way they are cut and eaten. These pies will require you to use eating utensils rather than just your hands, like a NY pizza would. Chicago pizzas are extremely filling, generally one slice will curb anyone’s appetite.

Come Get Your Pizza Fix at Empire Slice House

Wowza, after talking about all this pizza, we’re starving–come to Empire for a slice? We wanna hear all about your fav style of pizza, while enjoying a delicious bite! No matter if you prefer New York or Chicago-style, Empire Slice House has a special pizza for you. Check out our full menu on our website as well as to find a location closest to you. Not to brag on ourselves, but we also have an entire gallery of our delicious food so you can see for yourself how mouthwatering our pizza pies are. You know what we say, live free and pie hard. See you soon!