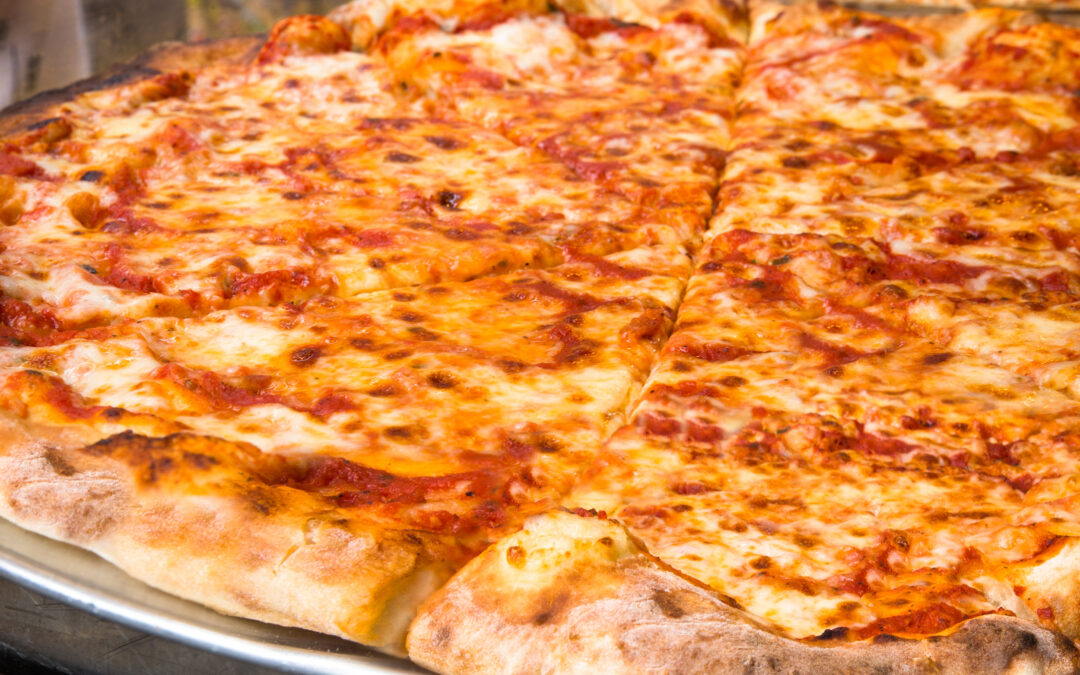 We’re sure you’ve at least heard of New York City’s iconic pizza with crunchy, thin crust, and layers of delicious toppings. NYC style pizza was created back in the 16th century and has evolved greatly since then. But who gets to take the credit for inventing the OG NYC style pizza? Would you believe us if we told you it was a bunch of neanderthals who were sittin’ around a campfire? What are the main ingredients–better yet, what makes a New York style pizza a New York pizza? Here at Empire Slice House in Edmond, we might be a little biased when it comes to the best New York Style pizza in Oklahoma, but we truly believe that we have uncovered the recipe for the best NYC pizzeria. Keep reading to learn a brief history of NYC style pizza, the ingredients that make it, and why Empire Slice House- Edmond is THE SPOT for all you NYC pizza lovers.

The invention of NYC style pizza is a hot topic amongst ancient Greece and the Egyptians who each independently created their own form of the NYC pizza. The main numerator being a crunchy flatbread that’s covered in oils and herbs. Now earlier when we asked if you’d believe us if we told you that neanderthals invented the first pizzas, we weren’t kidding! Believe it or not, Mr. and Mrs. Neanderthal created the very first pizza BY MISTAKE! Originally on a quest to make a pie, but due to lack of ingredients, they had to make due with what they DID have. Hence the pizza pie was born! Going back to the 16th and 17th centuries, Naples is where it all started and by the 1800s, there were pizzerias all over Italy. The United States wouldn’t hop on the pizza train until the early 20th century when an Italian immigrant, Gennaro Lombardi and his employee, Antonio Totonno Pero traveled to the U.S. and started selling pizzas in grocery stores. However, it didn’t take long for this new invention to take off. Pizzas became so popular that Lombardi  had no choice but to open his very own pizzeria. We should mention that Lombardi’s Pizzeria continues serving their Neapolitan pizzas just a block away from their original location–taking the proud title as one of the best pizzerias in New York’s five boroughs.

Ingredients That Make a NYC Pizza

So what makes New York City style pizza so mouthwateringly good? New Yorkers will tell you that it has to do with the texture and flavor of the crust, which can only be perfectly achieved through New York City’s water that has specific minerals. It’s said that this is the reason why it’s so difficult to replicate the consistency of the crust, even to the point where chefs around the nation have shipped truckloads of NYC water to their own pizza restaurants in an attempt to recreate this pizza style. Today, you are easily able to spot a New York City style pizza in any major city thanks to the tradition of pizza typically being  18 inches in diameter with hand-tossed, high-gluten deliciousness and the perfect crunch that is achieved via a coal-fired oven to top it off. However, in more recent years, most places use a gas oven–which can still result in a delicious NYC pizza. The tomato sauce is usually seasoned heavily with olive oil, garlic, salt, oregano, basil, crushed red pepper, and a dash of sugar, opposed to the original Neapolitan sauce which was uncooked crushed tomatoes and salt (thank god for pizza evolution). The cheese on a NYC style pizza is low-moisture mozzarella, and of course you are able to add your own toppings to your liking.

Here at Empire Slice House in Edmond, Oklahoma, we aim to recreate this iconic pizza style but with a twist! We also hold true to traditions and offer a classic New York City style pizza for those who like to keep it classic, though. We have monthly featured pies that are available at all of our 4 locations (and a 5th one in the works!). Check out our website to find a location closest to you, to view our full online menu, to learn more about who we are, and to see our gallery of some of our fav pizza pies! Want to work with Empire? Fill out an application online and someone will be in touch with you shortly. Make sure to follow us on Instagram to stay in-the-know of all things Empire like our pizza of the month, unexpected closures, special offers, and more. We have a saying around here that goes, “Live Free, Pie Hard”. So, live free, pie hard, and we’ll see you real soon!